To read this travelogue from beginning click HERE
Day 14-Leh-Ktop-Khardung-Khalsar-Agam-Shyok-DurbukTangaste
Day 4 was the most eventful day.We started early in the morning from our Guest House at Changspa road.Idea was to cross Khardung la pass early and reach Agam-Shyokas early possible.As soon as we lef Leh city, Doc Victor’s bike developed some pick up issue and refused to go uphill.We try to fix the issue but in vain.Doc saab asked us to proceed further without him as he did not want to abort our ride because of his bike.Unwillingly,reluctantly we resumed our ride towards Ktop while Doc returned to Leh to fix the bike.Road to Ktop was as usual mixed type.Intitail condition was good and worsen as we neared the pass.Few kilometers before pass,weather god got angry and snowfall started and temperature dropped resulting reduced visibility and numbness in fingers…I just hate this snowfall…It makes life so painful and unbearable for a rider.Last year too,same snowfall made my life pathetic.

We arrived on Ktop and thin layer of white snow sheet welcomed us.Winds were also fast and it was blizzard like situation on the K top.But Jassi was ecsatatic.After all he was at his dream place.He wanted to click many photos,wanted to buy some stuff from army shop.I advised him to complete his shopping ASAP.He parked his bike and gave his bike keys and went inside the shop.I waited him outside for few minutes and in cold and blizzard but he did not came out.I knew that a prolonged stay on this eighteen thousanders can make us AMS sick.I went inside again to remind him and found him talking to fauji.I asked him to finish his shopping and start the bike and came outside.Again,he did not come out so to save myself from AMS,i started my scooter and rode down towards Nubra.Again road was complete pathetic and bumpy ride made my neck,butt and spine painful.

I was riding towards South Pullu unaware that bike keys are with me.Blunder had just happened.I stopped at South Pullu and waited for Jassi but no sign of him.I move ahead towards lower Khardung village.I stopped at a tea shop and ordered some black tea to recover from my cold state.I insert my hand inside my jacket pocket and shockingly discovered Jassi’s bike keys.I was dumbfounded…stoned and perplexed. Borrowed shopkeepers phone and called on Jassi BSNL phone and told him that i am waiting for him Khardung village.After 1-2 hours Jassi reached Khardung and narrated whole events he faced without keys.He had to temper with ignition wiring to start his bike.We wasted few precious hours during this botched up act of mine.I asked him to resume the ride again and we reached Shyok valley after soon.Thanks to good roads of Nubra.In Shyok valley,a sand storm covered the whole valley and I could not do any photography due to this sudden sand storm. 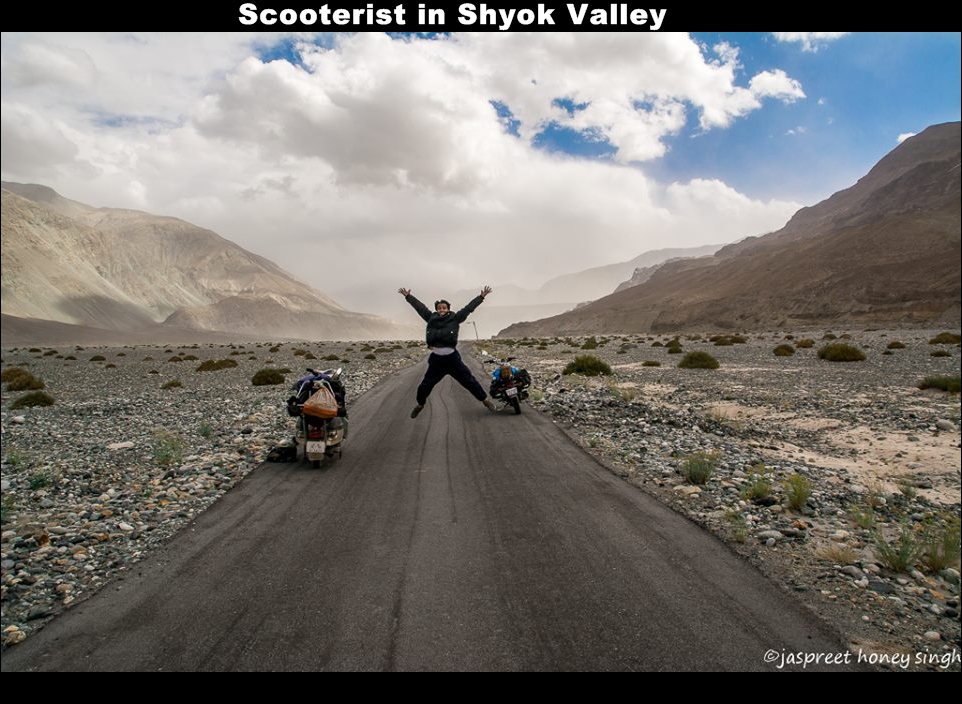 Soon we were in Agam village where I found a local man on roadside and asked him about the road condition towards Shyok ,he advisde us against going there but also told us that a truck went towards Shyok from here.With bated breath and full of anxiety,I moved ahead and within 6-7 kilometers,found the road disapeared.We continued and reached an BRO camp and asked them about road status.They said that bike may cross the river but scooter is impossible to cross…. My heart sank….disappointment took over and fear crept in…. sand storm was still active and dusk was falling…bad scenerio on Agam-Shyok section. But we were already trapped. 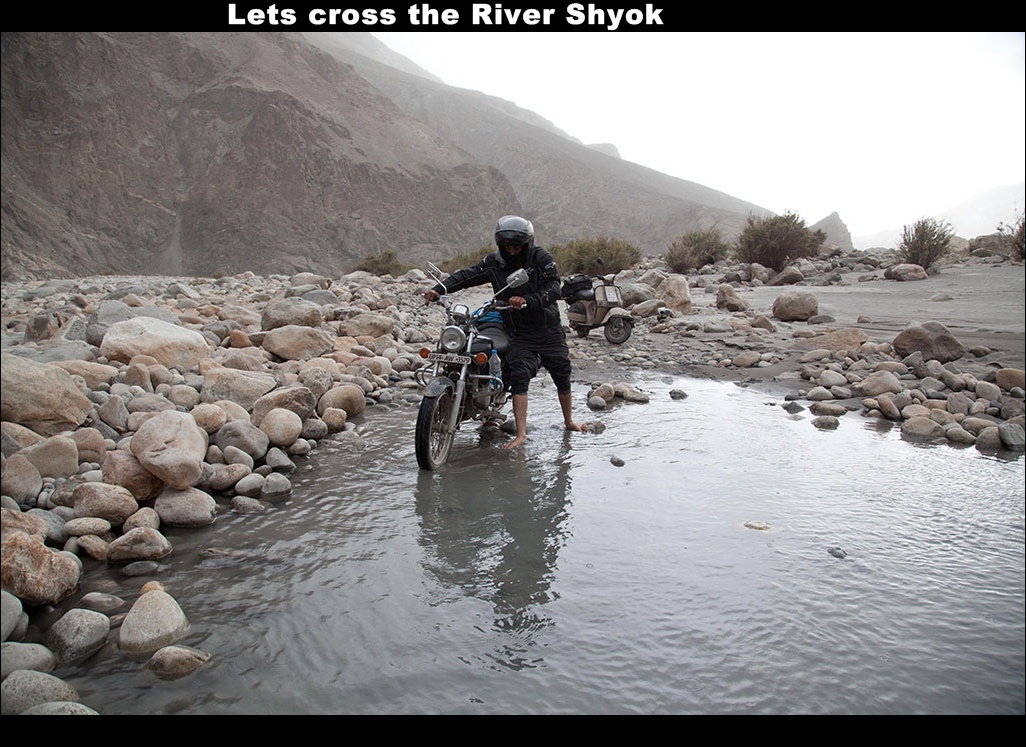 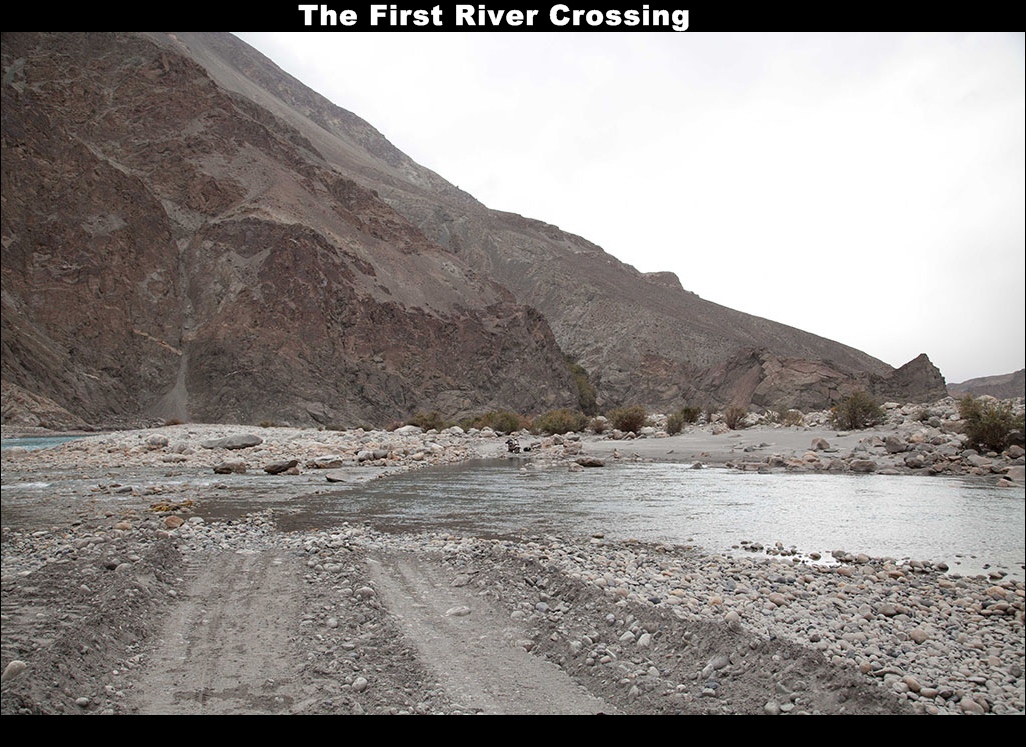 We left the BRO camp and suddenly a long,violent,razing Shyok river streams halted our speed.It was already evening time….I asked Jassi to quickly unload the luggage and prepare for some heart to mouth adventure and some unexpected scene.I made a recce of water stream by going inside the water.Wrapped the brown tape on bike exhaust and put the bike inside fast flowing Syhyok river filled with huge boulders,slippery boulders and some unseen deep space.Bike toppled,but we kept pushing and reached in the middle of water…point of no return….we were out of our breath and i asked Jassi to stop and relax for few moments bang in the middle of cold,violent river. Jassi had already gone into shock and cursing me…but still he posed a brave fight and hold the ground.We again pushed the bike and somehow crossed the water streams.. I told Jassi to go ahead and gauge the enormity and second water streams.He went ahead came back that next stream is longer…damn…another shocker…. 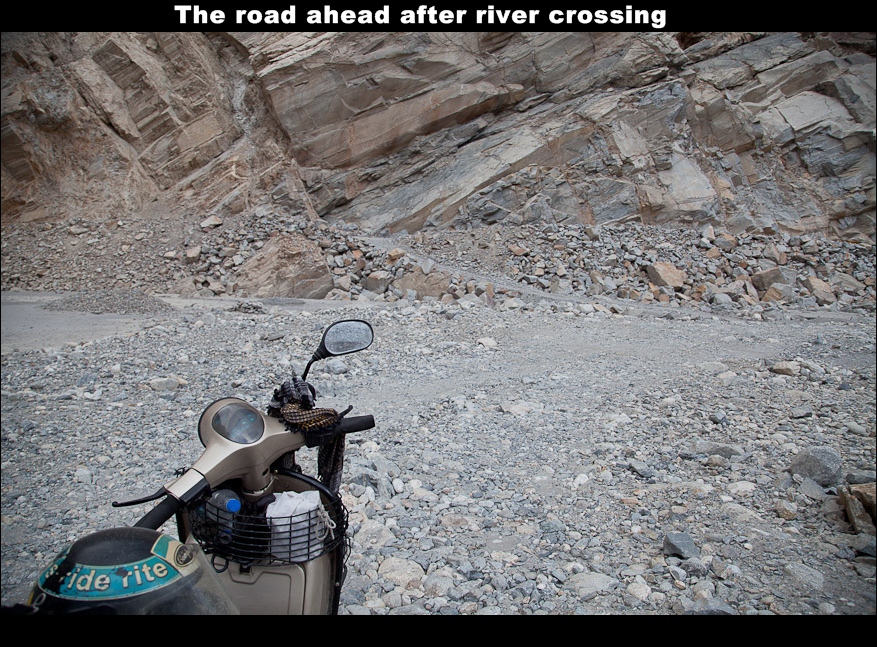 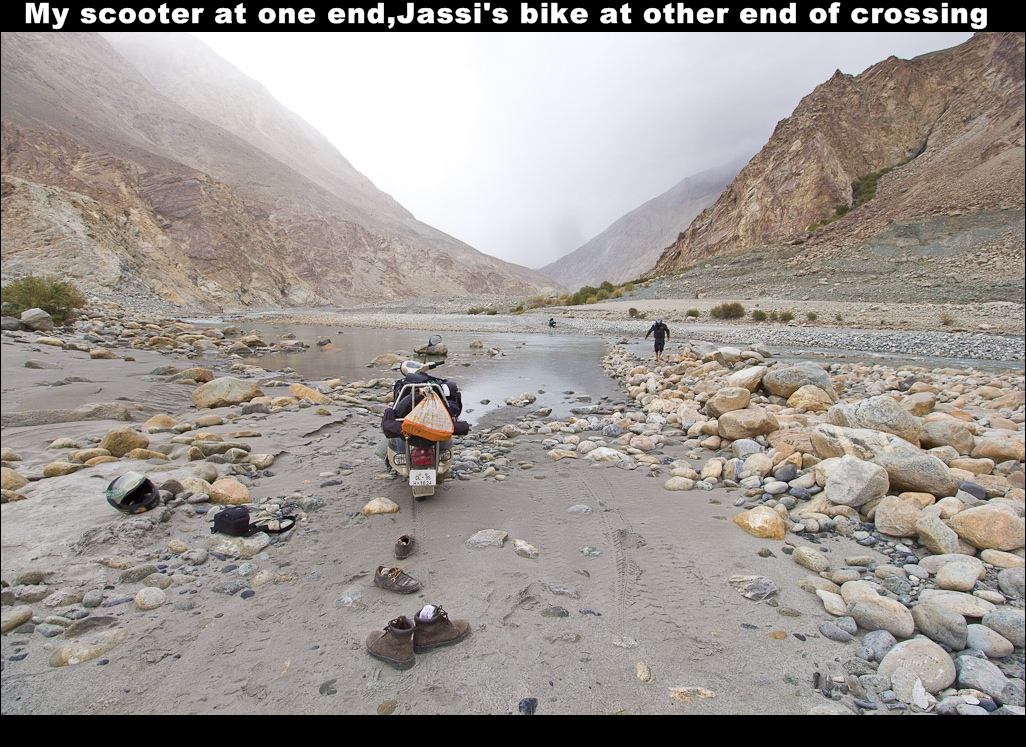 We repeat the pushing circus and somehow crossed my scooter.We collected our luggage and carried them on our shoulders walking thru stream.One river crossing done. But we were out of energy and out of breath and it was almost getting dark…making my mood gloomy. After a few moment of rest,we again plunged the bike into second water streams.Bike engine submerged and we had to stop many times in the middle to regain our breath and after a very laborious,dangerous and risky attempts,crossed the second river streams. Jassi was still in shock and i had to constantly console him…“Main Hoon Na”

Scooter was also crossed thru second stream and our joint efforts paid us and we were out of the biggest hurdle of this section…Luckily both the vehicles started again and we resumed our ride towards Shyok village in a dark evening.Road was filled with rocks and stones were falling on our head.It was really a very dangerous ride.We kept riding in dark Shyok valley,no signs of any human,no lights,no BRO camps,no lobor huts…nothing….. 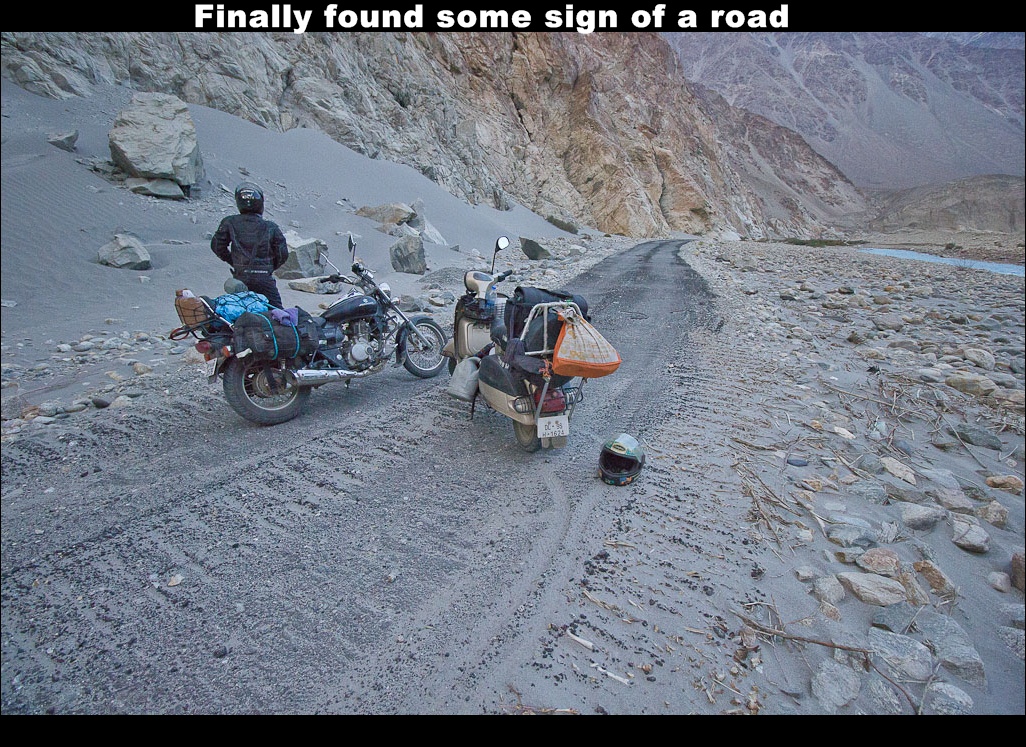 While riding on this section,I kept praying that no more water crossing please…. We crossed two-three bridges and in pitched dark night,i spotted two lights of incoming truck after few hours…Thank god…it was such a relief to see a vehicle…it means we are somewhere near a good road and we may find some homo sapaiens soon.We reached at a tri-junction type road where a yellow board announced the arrival of Shyok village. Hurrre… I reached Shyok village..woh bhi on my scooter..woh bhi via Agam village….my another dream fulfilled…I was overwhelmed… We had finally reached Shyok….a yellow board read….Shyok…Agam…and DBO….. I knocked on a house and an old man opened the door.I asked him for some water and asked him the directions for Durbuk and also asked him where we could stay at night.He replied that Durbuk is just 18 kms and road is just fine.In pitch dark night,we reached at Durbuk and found everything closed…I saw a house where a TV was runningand i knokced on the door and a gentleman told us that we could stay at Tangaste ,,just 6 kms from Durbuk…. When I hear that Tangaste is just round the corner, I regained my energy and made a final dash towards Tangaste and reached a deserted,dark Tangaste village and checkedinto Amir Khan fame guest house….totally exhausted,tired,shaken state with a friend who was in a deep shock….. I crashed into dining room of that home stay with my clothes heavily wet and soiled…and few surprised and perplexed pair of eyes of some MH tourists were staring at me…..They were relishing their whiskey pegs when I invaded the dining area of GH…. I did not speak for few minutes and just gulped down tow cups of hot tea.Tea revived me and a conversation started with MH gentlemen. What a day it had been…..Key loss…sand storm….land slide….water crossing…river crossing….ride on rocks….ride in pitch dark…ride with empty stomach and thirsty throat….but after all this hellish experience,I was a content soul…i was very happy…. Because,I covered deadly Agam-Shyok section on my scooter….I was very happy when i was sipping tea in my wet soiled clothes in Tangaste GH.Thanks to Jassi,who put a brave front and in-spite of being in shock he did not give up..